Tender Notificaton for the supply of Cadets Notebook and Stationery 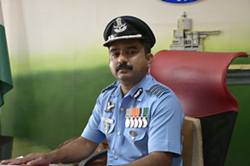 Gp Capt Ujjwal Ghormade, assumed the charge of Principal, Sainik School Kodagu on 06 Jan 20.  He is an alumni of prestigious Services Preparatory Institute,(SPI) Aurangabad, Maharashtra and possesses graduation in Science and Master’s degree in Business Administration.  He has rendered a commendable and fruitful service in the Indian Air Force for more than two decades. The Officer was commissioned in the Education Branch on 20 Jun 1998.

The Officer started his career by rendering service as a Fighter Controller and Senior Education Officer. Later he proved his mettle in the Security and Intelligence Wing. He has served as an instructor at Air Force Intelligence school Pune and commanded 10 Liaison Unit at Trivandrum. For his stellar services in the Indian Air Force, the Officer was selected to represent  India at the INDRA- a bilateral  tri-services exercise between India and Russia from 19 Oct 2017 to  29 October 2017 at Russia.

Gp Capt Ujjwal Ghormade is also an excellent Hockey and Football player and has represented the Indian Air Force at many sports competitions. He has a great interest in trekking as well.

He is married to Ms. K Maruthi Devi, who is also a Indian Air Force Officer in the rank of Wing Commander and  presently commanding a Transportable Radar Unit at Pune. Master Manas and Shriya are their children, studying in class XI and X  respectively.

Before taking over as the Principal of Sainik School Kodagu, the Officer was  Chief Instructor (Training) at Airmen Training School, Belgaum.