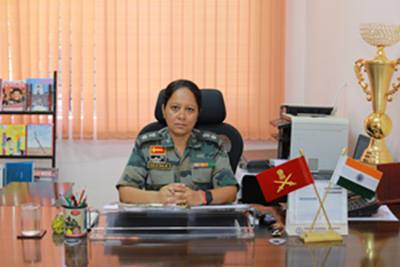 Lt Col Seema Tripathi was commissioned in Indian Army in the year 2003. Born in Kanpur Uttar Pradesh, the officer finished her schooling from KV Air Force station Bangalore and Bareilly. She graduated from Rohilkhand University, Bareilly. She obtained her Master of Education from IGNOU.She finished her training from Officer Training Academy, Chennai in the year 2003. Later she was posted in highly active field area, CI (OPS) area and also was Staff Officer in a Mountain Division.
The officer assumed the role of an instructor in army education Training College and Centre, Pachmarhi from the year 2008 to 2011. The officer has been associated with various Army Public Schools and Kendriya Vidhyalayas in the capacity of Secretary to the Chairman.

The Officer has been an instructor of English Language and was instrument in teaching Communication Skills to foreign officers of friendly foreign countries at Pachmari (Madhya Pradesh) and Wellington (Tamil Nadu).The Officer is a vivacious reader and a keen lover for plants and animals. The officer being adventurous was part of para sailing club where she earned a merit certificate. The Officer also won laurels by being a Gold medalist in volleyball and silver medalist in handball and basketball during her training at OTA, Chennai.

She is married to Lt Col VK Awasthi and the couple is blessed with two kids Miss Ashmi Awasthi and Miss Avni Awasthi.