The cadets of class VI visited the major tourist places in North Coorg like the The cauvery Nisarga Dhama, The Golden Temple, Belur Golf Club and A Coffee estate near Hebbale.
The trip started with Nisrgadhama visit, here cadets roam around the lush green bamboo gardens along the river cauvery. They fed the deers in captivity, jumped here and there and spend their day out.
The next destiny was the Golden Temple (Nomdrolling Buddhist Monastry) at Koppa, a major tourist actraction.  The boys visited the temple and offered their prayers to Bhagavan Buddha.
Later the contingent reached to Belur Golf club grounds. There they had lunch and spent their time in playing on rolling green grass surface.
At last we have reached to a Coffee estate near Hebbale and had a trek in the  undulating ups and downs of the hillock in the estate slopes with various species of kodagu spices
Finally the day’s trip got completed at the desk .  we reached the school safely.
We  owe  to the Principal for arranging the tour that made us to explore the magic land of kodagu.
Report by:
Y Venkatramana, TGT
In- charge

In overall development of student’s motivational tours plays a vital role. In regard to this the school authorities organised a motivational tour to Officers Training Academy(OTA), Chennai. And also planned to cover some informative places nearby Chennai so that we can utilise the opportunity in a fruitful way by gaining first hand experience at science museums and cherish the curiosity about the rich Indian heritage.

With a lot of excitations to explore new places and especially one of the India’s pride places that is OTA. We started our journey from school at midnight 0100 hr on 1st of September with 114 cadets being escorted by five staff members. After reaching Chennai at 1500 hr, we visited the Central Library which is one of the oldest and largest libraries in India with vast collection of books which covers knowledge of universe. As it was under renovation we could only peep through the windows and returned to the place of accommodation.

Next day morning we started our journey to Mahabalipuram, the UNESCO World Heritage Site which is known as the land of sculptures located 55km away from Chennai city, sometimes the journey will be more pleasurable than the destination but this time both journey and the destination were pleasurable thing because the road from Chennai city to Mahabalipuram was adjacent to seashore which added to a very amazing experience. The sculptures carved in single stone, temples carved at the top of the hill were astonishing and amazing about made us to think about the engineering skills of ancient times. Some of the important places we visited at Mahabalipuram are Pancha Rathas(Five Chariots) which is carved out from a single stone, a Mantapam, carved on top of a hill and sea shore temples. And the important point to note that vicinity of the temples was maintained well and cleanliness was ensured. We also got an opportunity to visit a light house and enjoyed the aerial view of the land of sculptures.

On the way to Chennai we visited Madras Crocodile bank Trust and Centre for Herpetology which is run by a private organisation. Almost 15 species of crocodile and some of the rare snakes imported from south America(Green anaconda) etc… also they kept for exhibition which was a wonderful experience to sea such a deadly alligators closer and real and to get to know about them.

Early morning in the next day was the important and major event of our tour was there that is Passing Out Parade(POP) at OTA, we all organised at OTA Parade ground by 5:30am the parade starts at 6am and ended after almost 2hours, the whole duration of POP was organised, well planned and draw our attention completely. The whole event was exciting and motivated our cadets to the peak and we are thankful for the authorities who gave us opportunity to witness a pride moment of an Indian.

After leaving the OTA we directly went to one of the oldest museums in India located at heart of the city, which is constructed in Indo-Saracenic style and consist a variety of artefacts and objects covering field’s including archaeology, numismatics, zoology, natural history sculptures, palm-leaf manuscripts and Amaravati paintings. The museum was a boon to a history lover who can get almost all information of our history in one place. After that we visited Anna Square which is the memorial of Great actor former Chief Minister MG Ramachandran, but unfortunately the memorial was undergoing renovation so we did spend some time nearby places by roaming and return back to central railway station. And finally we reached our school next day morning with lot of memories and new josh motivated by POP. 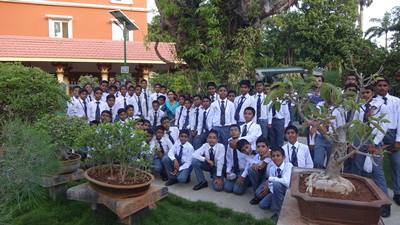 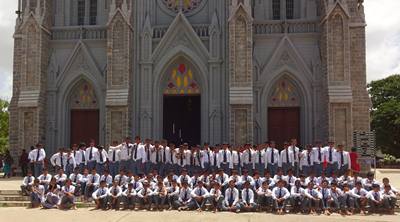 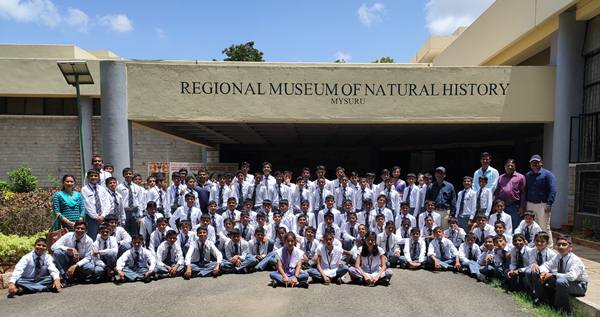 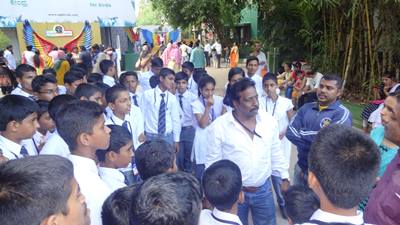 The Glimpses of THE MOTIVATIONAL TOUR OF CLASS VIII TO MYSURU 2019
Our School organized an educational tour on 15-06-2018 for the cadets of class VIII. 95 cadets and 5 staff members were part of the tour.
1. Visit to Reliance Market:
Reliance Whole sale has now grown into  India’s biggest shopping choice delivering superior value to its customers, The cadets learnt about the unmatched network of outlets and world class shopping environment.

2. Visit to St. Philomena’s Church:
Cadets visited the renowned church which is at the heart of the city, cadets were amazed by its beautiful architecture and murals depicting scenes in the life of Christ.

3. Visit to Museum of Natural History:
The museum has Biological diversity and Life through the Ages, numerous displays, geological wealth, flora and fauna of southern India, with more focus on the Western Ghats. The museum provided an exposure of Biodiversity and Geographical features to the cadets.

6. Visit to Bonsai Garden and Bird centre:
The cadets could see various bonsai trees placed in an attractive manner in the garden. They also visited the parrot park and get introduced with various exotic bird species.

After having tea, we returned to SSKG. The trip was a good learning experience for all of us. 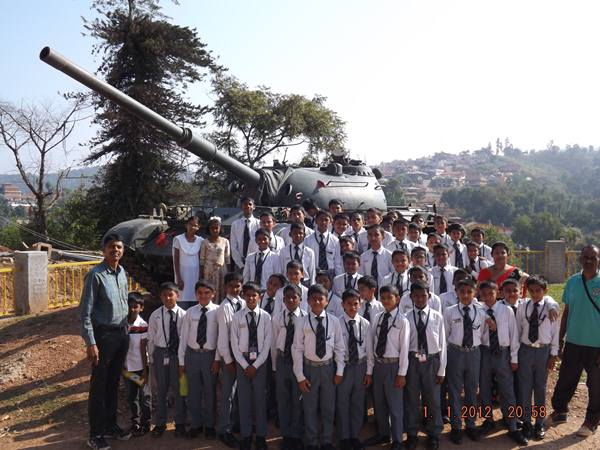 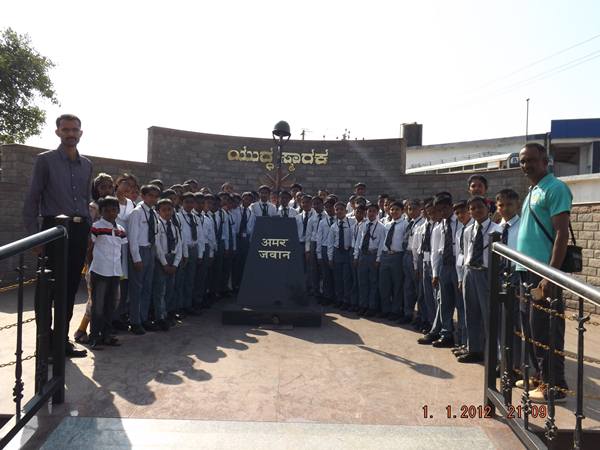 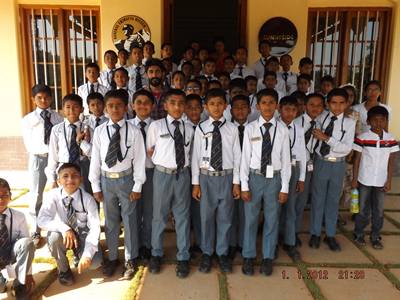 The cadets of class VII visited the major tourist places in South Coorg like the Sunny side, the reseidence of Gen. Timaiah etc.Presently The residence of the Gneral  is  the museum that dispalys war equipment  including heavy  battle tanks, anchors, guns and mortors which were used in the war. All the cadets were excited to see them. The museum is also having a war memorial in its premises where all the cadets paid tributes to the martyrs.

The next destination  was the Raja Seat in Madikeri, where cadets enjoyed the floral garden with beatiful flowers and replicas of animals made of fiber . Above all the distant view  of the places from the view point was the feast to the eyes .
Then  we visited Talacauvery, the seat of river Cauvery .we also visited the temple that  is dedicated to the Goddess Kaveri. There is a sacred pond in the birth place of the river .  The sacred pond had a little water due to less rain, later we came down through the curvy road to Bhagamandala.Finishing  the  lunch in time , we visited the Triveni Sangama,the confluence of three rivers .
Then the journey  headed to Kabbe a raising hill of about 900 meter height. All of us were thrilled and excited to climb the same to have an aerial view of the places. we felt that we were on the lap of nature.  From the top of the hill we could see the land of Kerala vividly .
Finally the day’s trip got completed at the desk .  we reached the school safely before the dinner.
We  owe  to the Principal for arranging the tour that made us to explore the magic land of kodagu.
Report by:
Y Venkatramana, TGT
In- charge 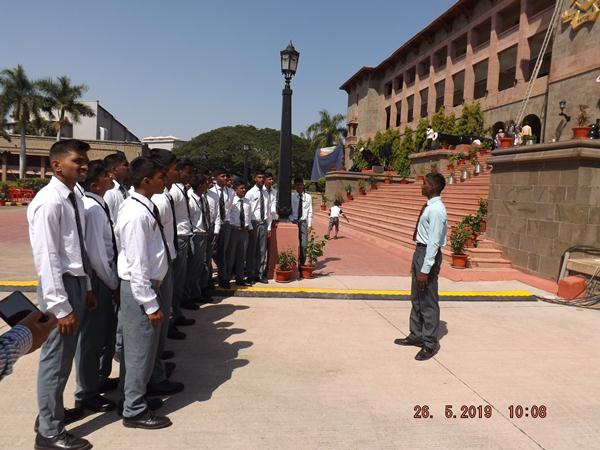 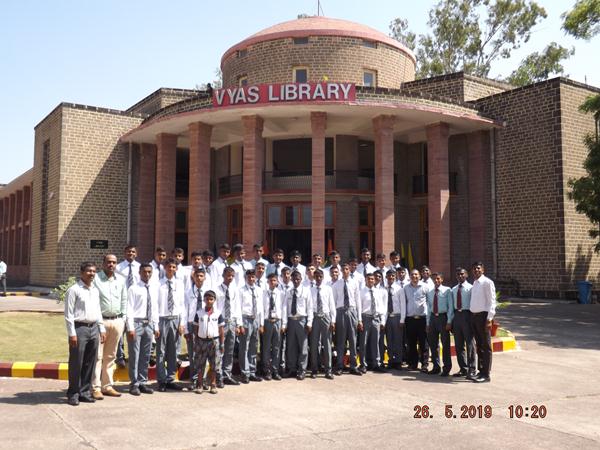 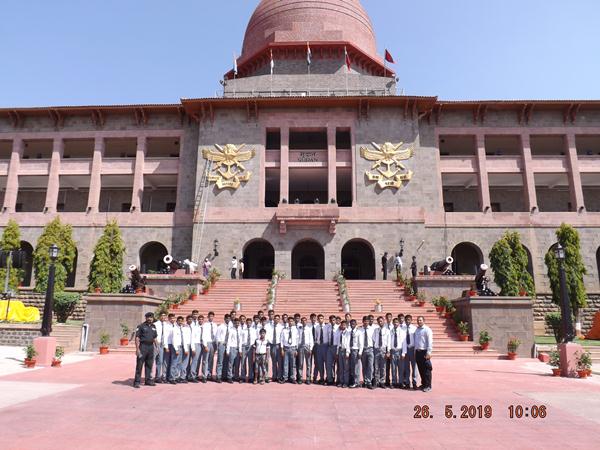