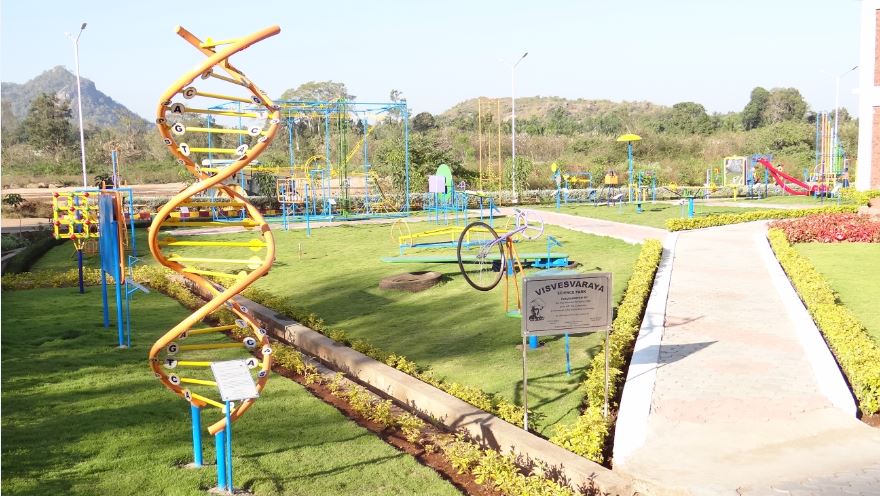 The science park of Sainik School Kodagu is named after Bharatratna Sir Mokshagundam Visvesvaraya, a great visionary who shaped the scientific temper of India and infused a scientific vision among the early generations of 20th century India. His herculean works are still a mighty source of inspiration for the young cadets of our school. The science park was inaugurated by Air Vice Marshal PR Sinha on 15 Aug 2013. It is considered to be first of its kind in Kodagu district. Many newspapers have acknowledged its uniqueness by appreciating the exhibits which has led to simplifying many difficult scientific terms and processes. Presently there are 41 exhibits. To name a few- Lissajou’s Figure, Cycloidal path, Parabolic reflector, Sympatetic swing, Seebek Siren, Perception of depth, Archimedes’s Screw, Pythagoras Theorem, How frication helps, Angular momentum, Hydro electric power plant, DNA Model, World Time (Cylindrical type), Periodic Table and many more.

The cadets are given ample opportunity to gain first hand experience of the scientific terms, terminology and experiments being learnt in the theory classes. This makes learning a very fruitful and interesting process. The cadets do have a provision to use the facility of using the exhibits during their leisure time. It short this hub of science modules is a ‘friend and tutor’ where children enjoy the freedom of learning at  their own pace and also understand critical concepts in a better way.

Presently every class has been allotted one period  a week to visit the park and learn science in a fruitful way. This modern science park contains all the modules and exhibits enlisted and recommended by the Central Board of Secondary Education, New Delhi in the school curriculum. In short the Visvesvaraya Science Park  has become an interesting aid of learning for the cadets of Sainik School Kodagu.