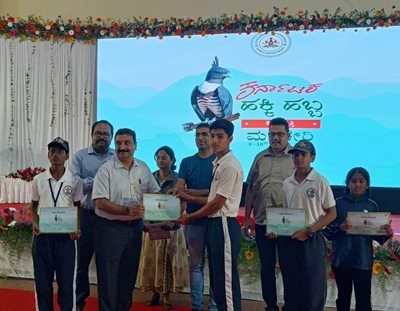 8th edition of Karnataka Bird Festival was organised at Madikeri from 08 April to 10 April 2022 by Karnataka Forest Department in association with Karnataka Ecotourism and Jungle Lodges and Resorts. The mascot bird for the bird festival was Black Baza. Black Baza is a migratory bird from Eastern Himalayas, China and South East Asia. Cadets from various classes, Principal and Escorting Staff from Sainik School Kodagu participated in the Inauguration function, Birding and technical sessions.

On 09 April 2022 four cadets and two teachers participated in the birding events. We reached Madikeri at 0530 hrs and There were total of 8 trials were organised. We were part of trail-5 which was Nishane Betta. We were taken by Tempo traveller and dropped close to the Nishane Betta at 0630hrs. We were very lucky for being in trail-5 (Nishane Betta) because of the fact that our Team leader was none other than the renowned Ornithologist and Entomologist Dr. Subramanya S who worked directly under the guidance of Birdman of India Dr. Salim Ali during his young days. Dr. Subramanya S demystified some of the mysteries in the nature such as how exactly Sunbirds steal nectar by puncturing the flowers of Hibiscus rosa-sinensis from the sideways as their beak is little short compared to the calyx of the flower. We had our breakfast during our walk itself. Mr. Karthikeyan S, Chief Naturalist at Jungle Lodges and Resorts helped our cadets to identify few birds and butterflies by giving hints. During our walk towards the Nishane Betta we observed various different types of Birds such as Black Naped Monarch, Dringo, White Barbet, Malabar Lark, Warbler and Sunbird. We also saw a Giant Squirrel having its meal on one of the tallest trees in the jungle. We reached Nishane betta after
covering 10 Km by walk at 1100 hrs bit exhausted and returned back to the Crystal Court at 1200 hrs and had a very sumptuous lunch in the afternoon and took rest for a while. At 1700 hrs technical sessions began. Firstly Mr. Bopanna Pattada showed few of his exemplary photographs showcasing avian diversity of Kodagu. Dr. Subramnya S gave very informative presentation on Grassbirds of Brahmagiri. Shortly after the tea break very beautiful short film titled "Mountains of Kodagu" was screened. We were spell bound after seeing the hidden beauty which this Land of Warriors holds. Later Ms Niti Mahesh and Dr. Priti Bangal gave the presentation on Birds in ripparian corridors and Mixed species flocks respectively and the session got culminated at 1950 hrs. After having a very sumptuous dinner we came back to the school at 2200 hrs.

On 10 April 2022, four cadets from Ornithology Club and 3 staff accompanied by Principal participated in the final day of the Bird festival. We reached Madikeri at 0530hrs in the early morning and shortly after having tea we were dropped to Gali Beedu trail by two different vehicles. The forest was dense and completely covered with morning mist. We were in awe after seeing the beauty of the nature. We took few photographs and started to search and identify few birds and insects. We saw various endemic birds such as Malabar Grey Hornbill, Yellow Browed Bulbul and Black Naped Oriole and Greater racket-tailed Drongo few other birds such as Orange Minivet and Dark Fainted Babbler too. After walking down the hill we reached near a small stream with a small bridge. There we could able to spot few more birds such as Green Bee Eater, Common Kingfisher and Barn Swallow. We had our breakfast near the bank of that stream and enjoyed the company of each other in the midst of the nature. We returned back to Madikeri with full of contentment and memories to cherish from the bird festival.

As rightly said by an American famous poet Emerson “We do not inherit the Earth from our ancestors, we borrow it from our children.” This Bird festival created a long lasting love on the minds of Cadets and Staff for the nature, conservation and bird watching.

The contest was organized by JSW Paints in association with The Hindu Young World from class 3 to 12. From our school the 07 cadets of class 10 and 08 cadets of class 09 have prepared the paintings and registered in the respected website. The last date for registration was 28 Feb 2022 and the posters are sent by post to regional office Mysuru on 01 mar 2022.

The session started at 1000 hrs on Sunday (27 Feb 2022). The link was sent in SSKG Manikarnika group, which is meant for all girl cadets including Boarders, Day Scholars and Lady Staff.

The following important topics are covered.

The entire session was highly interactive. Girl cadets were highly motivated by both teachers and Dr Parul Madam to ask about their doubts .questions/queries. The session was of four hours and the details as follows:-

The session was very interesting because of presentation of meaningful videos and PPTs.