51 cadets from class IX and X boarded the school bus on 13th December to reach Bettadapura, Periyapatna Taluk, Mysuru Dist, 20 Km away from the school. The gigantic view of the hill was attracting us from the foothills. We had a question in our minds that can we climb up the hill and come down before the sunset? On our way up to the hill, a local boy used his taunting words saying ‘you need four hours to climb up!’  It was already 3.45 pm. We had two hours on hand and we had to reach school by six o’ clock to attend our study hours. We were firm in our decision. We had decided that  ‘we will do it’. The rocky hill was with 3105 stairs to climb and we had to prove that we are the cadets of Sainik School Kodagu and we do possess the fitness and as the name of our hobby club itself indicates ‘ Kalpower’. Our muscles did co- operate with us and by 4.45 pm we were at the top. We saw the archaeological site over there at the top and took the deep breath. When we saw ourselves wet in sweat, smiling at each other, The message conveyed- ‘We did it’.

After reading the information board displayed on the site, we came to know that the hills are interconnecting geographical area of Vijayanagar Empire,  Hoysalas of Dwarasamudra and Tipu Sultan of Mysore, all of them were prominent rulers of ancient, medieval and modern rulers of India. We also saw the natural vegetation, flora and got first-hand experience of local bushes and shrubs.

We climbed down the hills, reached the base at 5.45 pm and reached back our alma matter at 6.15 PM. Thanks to the school authorities for extending all the help to complete the trek.

Indian Naval Academy (INA), Ezhimala has organised its maiden ‘Land of Legends’ marathon on 03 Dec 2017. The marathon was conducted to commemorate the Navy Week celebrations. Indian Navy celebrates every year as the Navy Day to commemorate the daring missile attack by Indian Naval warships on Karachi Harbour during the 1971 war against Pakistan and in memory of the sacrifices made by Naval personnel towards the stunning victory in that war.

The maiden marathon received overwhelming response from students of schools and colleges across Kerala, Karnataka, Tamil Nadu and other states of India, which would act as catalyst to motivate the students to pursue Indian Navy as a career. It is for the first time that a marathon of such magnitude was held at Indian Naval Academy to commemorate the Navy Week celebrations 2017.

Our contingent of 190 cadets and 8 escorting Staff members participated in 5 K run and successfully completed to receive our medals. After successful completion of the run we felt that we are honoured by getting a chance to run in this prestigious event. Our Aptc CHM Krishna Odari ran a distance of 21 KM. At the end of the event the organisers appreciated us as we were the largest in number from a single institution. We had a chance to interact with other cadets of various Sainik Schools like Sainik School Bijapur, Sainik School Nagrota, Sainik School Nalanda and of course Rastriya Military School, Belgaum.

This was a unique event for all the participants as they got a chance to stay in the Naval cadets accommodation and experience the life of a cadet firsthand. With race course running along a scenic route inside the Indian Naval Academy, the participants got a flavour of life at INA even as they attempted the challenging run through winding roads, beach, forest tracks and hills.

The ‘Land of Legends’ marathon was an ideal occasion that provided once in a lifetime opportunity for people from all walks of life to experience and visit the Indian Naval Academy Campus. The ‘Land of Legends’ marathon at INA, Ezhimala was conceptualised as an annual National level event as part of the Navy Week celebrations aimed to promote the culture of fitness, health and the spirit of long distance running.

There were two competitive race categories planned which include, 21.1 km half marathon and 10 km run. There was also a 5 km and 3 km fun run for senior citizens, ladies and children during the event.

In his address, the chief Guest congratulated the winners and for their display of house spirit. He added that a young cadet of class VI really transforms into a cadet of Sainik School only when he successfully completes the cross country. He complimented all housemasters for raising the morale and motivational level of their cadets to perform well. 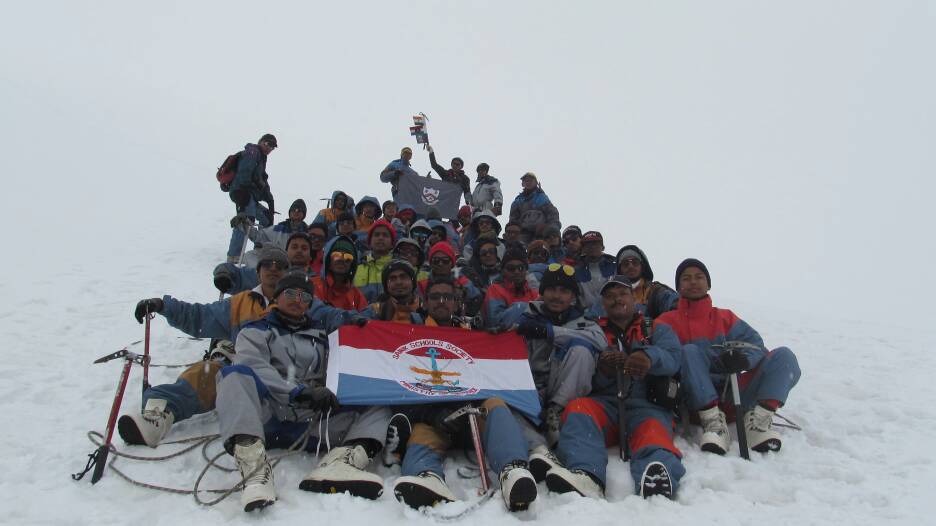 Sainik School Society organises mountaineering expedition every year for kindling the spirit of adventure among the cadets of Sainik Schools all over India. Two cadets from each sainik School are given the opportunity to participate in this venture. They choose different peaks every year for this adventure trip.  This year we have been given The Friendship Peak (5289 meters) to test our mettle.

We left the school on 28th May 2017 at 1000 hrs after the breakfast.  We reached Sainik School Kunjapura  on 30th May 2017 at 1400 hrs. When we reached the school it was in jubilant mood as the school would be organising a farewell dinner for their outgoing principal on 31st May 2017 .

Many cadets started joining us. We were accommodated for another two days in the school.  On Third of June,2017 we had flag off ceremony in the Governor’s House, Chandigarh.  After the ceremony in the evening we went on bus to Manali.  We reached there on 4th June,2017 and stayed in the Eco Himalayan camp at Nethrukund.  Then on 5th June we had Zip line, Rappelling etc.

The next day we went for shopping to the nearby market had some leisure time.  Though our plan was to leave on 7th June because of inclement weather we couldn’t proceed.  So, we started on 8th June for trekking.  We walked up to the base camp at Rollang. At the high altitude towards our destiny we felt terrible cold, sometimes, we felt for our parents’ presence but the communication was cut, and the cold was unbearable. The next day we crossed the next hill by name Lady leg. It was about 6-7 km and we set up a camp there.  It was biting cold than before.  We were issued the climbing boots and ice axe, for going up on ice.  It is a training given to the participants on scaling, self arrest and erecting a tent during the expedition.

Once the training was over we were prepared to conquer the peak.  The next day was the memorable one, we woke up at 4’O clock and we were fed sumptuously with dry fruits and soft drinks.  At last out of 40, 38 of them made it up to the peak. It was really the happiest moment.  We felt that we achieved something, a sense of satisfaction and soulfulness enveloped us and it was on 12th June. We had flag in ceremony on 19th June. After the ceremony some of them bade goodbye to us, parting was painful.

The mountaineering expedition taught us many lessons. It made us to accept the both failure and success equally. The co operative and sportive attitude among the participants while climbing made us understand the joy in appreciating the success of others.  I discovered many friends, Cdt. Jiyalal and Cdt RS Bhati from SS Chittorgarh, Cdt Dheeraj and Cdt Amit from SS Golpara, Cdt Om and Cdt Roushan. They were very close to me during the camp. They were very jovial and cooperative. I miss them a lot.

We are indebted to our Escorting staff Mr. JS Gulia and Mr. Anurag. It was a mind blogging experience for me and I never forget this.  My thanks goes to my beloved Principal, Vice Principal and Admin Officer above all my teachers who helped me to discover the great watchword “Never give up”.

The members of the ‘Kalpower Trekking Club’, enthusiastically assembled on the parade tarmac on 13 Sep 2017 to start our trek to Jenkallbetta falling in Kanive region of Somwarpet Taluk. As an administrative requirement the permission was taken from District Conservator of Forests, Madikeri. He graciously agreed to send two of his staff members to accompany us to reach the peak safely. As per his orders Mr. Poovaiah and Mr. Veeresh (Both of them were guards of the forest department) Joined us on the day.